Our mission is to educate the people around the globe about Iraqi Christian persecution, ask for prayers, and raise funds to support their basic humanitarian needs and partake in rebuilding their lives.

Our faith is Christianity. We believe the Bible to be the inspired written Word of God. We encourage prayer for the persecuted Christians, not only in the Middle East, but around the globe, because we have witnessed and experienced the power of prayer. We believe in the loving Trinity of three equally Divine Persons: Father, Son, and Holy Spirit.

We do not discriminate against any Christian denomination. We are all members of the one Body of Christ, regardless of our theological differences.

We affirm that the Assyrians (also known as Chaldeans and Syriacs) are the indigenous people of Iraq and that they thereby have the rights of existence, self-administration, and self-defense in their ancestral homeland, the province of Nineveh.

We believe that the State of Israel (Yisrael) has the right to exist and to thrive as a democracy in the Middle East.

We strongly denounce the atrocities that Islamist extremism is committing against humanity, especially against Christians.

We believe that the essential solution for the Middle East and the whole world is Jesus.

Our first obligation is to help and care for our own Christian brothers and sisters who are in the greatest need.

We will continue to employ all resources at our disposal to help save the lives of Christians who are persecuted, in the most transparent, ethical, and sacrificial manner, reflecting Christ’s love for his Church.

An Assyrian Christian born and raised in Iran, Juliana Taimoorazy is the founder and president of the Iraqi Christian Relief Council, an organization that raises awareness about the persecuted church in Iraq and helps Assyrian (Chaldean and Syriac) refugees resettle in the United States. Smuggled out of Iran in 1989 to avoid religious persecution, she sought asylumin America. As a former Assyrian Christian refugee herself, Juliana is an unshakable voice for the persecuted church. She advocates on human rights everywhere from television and radio to the halls of Capitol Hill. She is a Advocacy Fellow at the Philos Project.

Iraqi Christiana are the indigenous children of Bet-Nahrain (ancient Mesopotamia), the land between two rivers. Most have become accustomed to living under religious discrimination, threat, persecution, and violence. In particular, with the intervention of the US in Iraq, the Assyrians of Iraq who are also called Chaldean and Syriacs (depending on their Christian denominational affiliation) became a target of Islamic radicalism.

In 2006, as we watched attacks on churches in Baghdad, we were outraged with the lack of attention given to the crisis faced by the Christians. This was the day when we decided to be a voice for Christians in Iraq.

After meeting the Late Francis Cardinal George of the Archdiocese of Chicago, accompanied by much prayer, in 2007 we established Iraqi Christian Relief Council. Our team committed to take the responsibility of spreading the word about the brutal treatment of the Christians in Iraq from that day forward. In 2009, we became a 501(c)(3) organization registered in the state of Illinois.

Today our work consists of humanitarian efforts, advocacy, prayer support, and education. We travel extensively throughout the world on behalf of the persecuted Christians of Iraq.

Despite the cruel ISIS attacks in 2014, we’ve witnessed the Christians remain steadfast in their faith in the Lord. We are continually moved by the passion and perseverance of this ancient and indigenous community.

Our work is funded through the generosity of individuals, churches, foundations, and businesses.

In July of 2007, immediately after one of her meetings with the Archdiocese of Chicago, our founder and president, Juliana Taimoorzy, decided to write a letter to God and plead for His help. Julian's letter is above.

With the Grace of God and through your generosity, we have been able to impact hundreds of thousands of lives in Iraq, Jordan, Lebanon, Turkey, Australia, France and the United States of America.

Who are Iraqi Christians?

With her selfless work and dedication, the world has taken notice of the work of our founder, Juliana Taimoorazy: 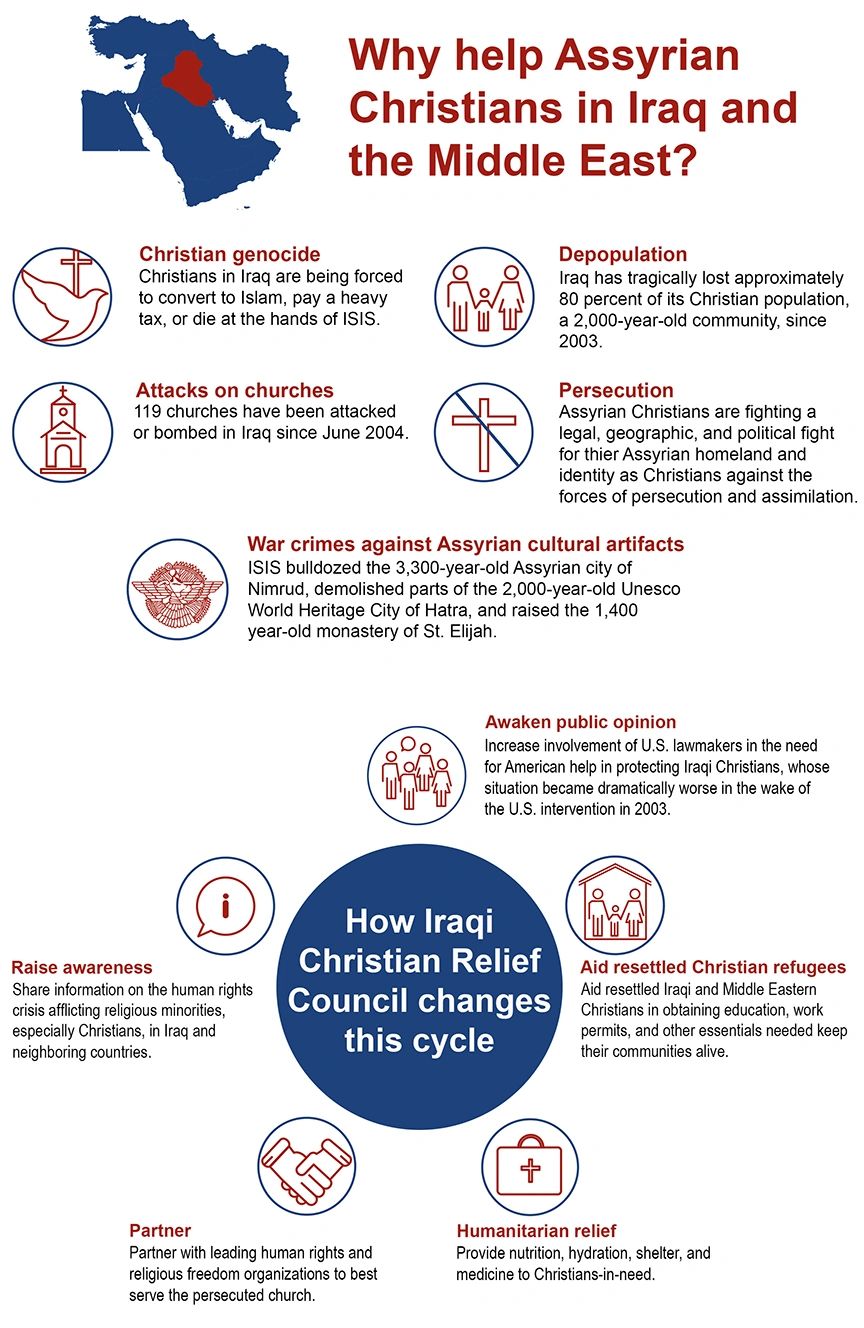